Too bad it wasn't a 1-day tournament 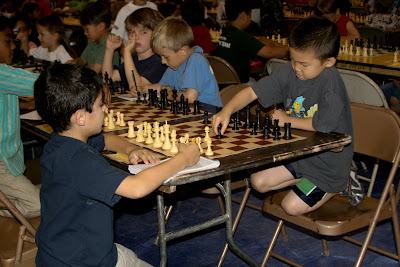 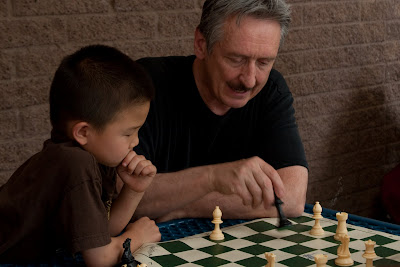 Riley competed in the 2-day State chess tournament. He was incredible on day 1. He said he was tired on day 2.
At the end of Day 1, he was in either second or third place. His last game of the day was played on table 1 against the #1 player at that point. He pulled out a draw (kind of like a tie), but the other player told the results keeper that Riley lost. There was some controversy when Riley's coach found out. It eventually got worked out, and Riley and the other player were awarded a draw. So, at the end of Day 1, Riley had scored 4.5 out of a possible 5.
For whatever reason, he wasn't as successful on Day 2. He lost all 4 games. It was good enough for him to take 12th place out of 34 children in his age group. The best part was that Riley took the losses in stride, made a new friend, and had a lot of fun. He can't wait until the next tournament. We even met some of the parents of the Sonoran Sky chess team. And, Riley's new friend will be in kindergarten at Sonoran Sky next year. It will be nice to have a friend there.
These chess tournaments are a big deal for a lot of the kids and the parents. At this point, it is still just a fun past time for us. I hope we can keep it that way and not get too competitive.
Posted by byMelinda at 2:40 PM 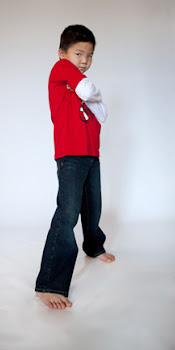